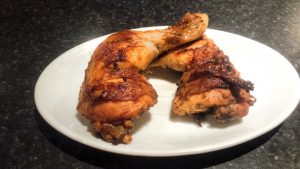 So last night we had to throw together a bit of a quicker dinner than I had planned.

My intentions of firing up the BBQ were put on hold partly due to the weather (which wasn’t really a deterrent) and simply just running outta time.

So we threw together a nice simple but tasty dinner of chicken legs and homemade chips with a bit of veg too.

The chicken turned out to be full of flavour and had that yummy crispy skin on top.

Not often I'd eat the skin but this was seriously good.

I gave the chicken legs a slit across the top with a good sharp knife and then coated them well with olive oil in a nice big bowl.

Then put about 2 good tablespoons of fajita spice mix on top and a squeeze of lemon juice and mixed them really well. Don’t be afraid to get in there with your hands to coat them fully, it makes a nice difference in the end!

Lay them out on a try nicely spaced out and then cook under a medium to hot grill, turning the legs over every 5 mins for about 25 to 30 mins until nicely done and skin has gone crispy. 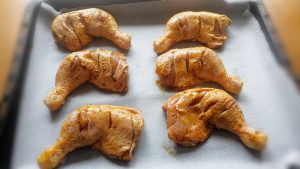 Takes very little effort and is good and cheap too!

Give them a go and cook up a few extra to use for lunch the following day.