We are Creatures of Habit. 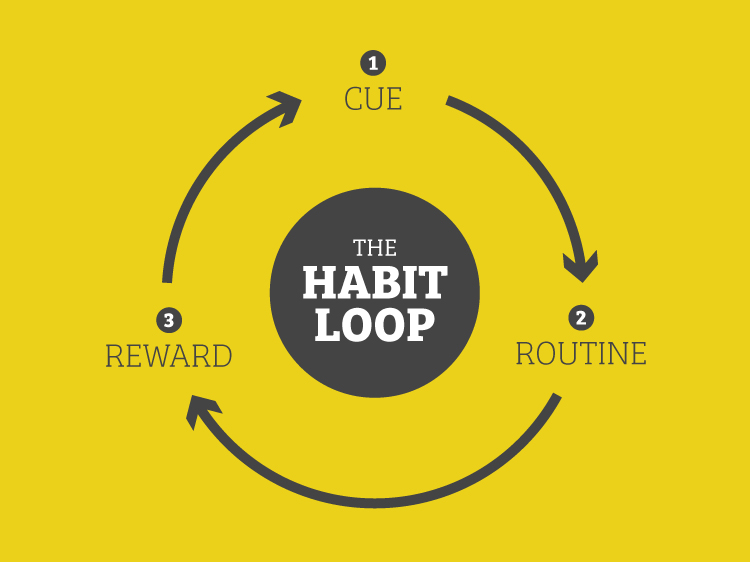 A habit is a routine of behaviour that is repeated regularly and leads to occur subconsciously.

With so much information in our world to process, our brain loves the simple things and forming habits is one of the ways it can do this.

How often have you habitually gone for something sweet after dinner despite being full? Have a smoke on a lunch break? Or snack thoughtlessly while watching T.V?

These are all habits that have formed and are quite hard to change.

It’s commonly believed that it takes 30 days to form a habit but the actual average is much higher at 66 days. So that 30 day approach may only be half way there to help create your new habits.

Charles Duhigg has brought awareness to the “Habit loop”. This is a simple neurological loop at the core of every habit. It consists of 3 parts. A cue. A routine. A reward.

Now if we take the habit of eating something sweet after dinner as our example. You know you are full. You know you don’t need that bar of chocolate, yet you still go for it. Ending up annoyed with yourself later.

This may not be down to poor will power but more so the power of habits.

Once you have identified the habit you want to change, you can now look at your habit loop to help you.

So, the cue may be putting on the kettle after dinner. The routine is making a cup of tea and taking a bar out of the press and having them together. The reward is that nice comfort feeling of a hot drink after dinner.

So, the main thing to remember when it comes to habits is that it’s nearly impossible to break. But it is however much more realistic to change one that already exists.

The way that we change one is by replacing the “routine” section of our habit loop.

In the case above, we need to replace making the tea and eating the chocolate bar while still keeping the cue (kettle switched on) and the reward (comfort and warmth) the same.

We could replace the regular tea with a green, peppermint or ginger tea to give us the same reward. Or buying an 85% dark chocolate bar that you will struggle to over eat, while keeping your regular tea in place.

We are
looking for the reward (comfort) but choosing a better routine.

This approach can be used to change any habit while saving you the struggle of trying to break a habit. It lets you take a more successful route of replacing them.

So remember! We need to:

1) Identify the habit to change.
2) Find the cue.
3) Identify the routine portion of the loop.
4) Examine the reward.
5) Replace the old routine with your new beneficial step.
6) Give it time and experiment.